Nidhhi Agerwal joined the cast of 'iSmart Shankar' starring Ram Pothineni and Directed by Puri Jagannath as the main female lead. None other than Charmee Kaur is handling the production work of this project.

Charmee Kaur shared a funny video of her teasing the 'iSmart Girl' on her social media handle. In the footage, Charmee enters the office greeting the staff and reaches the room where Nidhhi Agerwal was found reading. The Chubby Beauty enquired Nidhhi what was she doing, for which she replied: 'I am reading the script as Sir called Me to read the script Today'. Then, Charmee finds Nidhhi was hiding something under her thighs. Finally, The Skinny Babe admits she is reading the book titled 'Why Men Love Bitches?' as Puri asked her to do so and make it a bible. Following which, Both Charmee and Nidhhi agree that this book is like a bible.

Samantha Replaces Rashmika in NTR's Next! 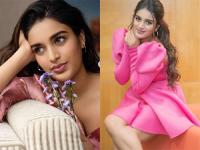