The love fans have for Powerstar Pawan Kalyan is unmatchable. Despite the average movies he has been giving over the past seven years which include a lot of flops and remakes, they are still showering unconditional love on him. Updates about his movies trend on top in social media all the time.

As we know, he is currently working on 'Hari Hara Veera Mallu' which is a period drama. The shooting has been going on from a really long time and it was postponed several times due to Pawan's political commitments. There is no clarity over the movie's release date and fans are curious to get some key updates on the movie.

The film's unit recently took to social media and made a few tweets. It reads, "We are extremely confident that #HHVM will be a milestone movie and sure will be celebrated by one and all around the globe. We require all your love and constant support going forward."

Another tweet says, "The shoot of #HariharaVeeraMallu is progressing at a brisk pace in an enormous set erected at Ramoji Film city as per schedule since October last week with sri @PawanKalyan garu along with a nine hundred cast and crew participating with all their might. Any work of quality cinema with historic significance that stands the test of time, demands meticulous detailing, research and immense effort of hundreds of cast and crew."

They have added a few behind-the-scenes photos where we can see the crew looking at the output and there is Pawan who is smiling while looking into the laptop too. They have definitely made the fans happy with these updates.

Gnana Shekhar is the cinematographer while MM Keeravani is the music composer. It is being produced on a massive budget by Mega Surya Production. This is his third collaboration with Pawan Kalyan after a fan favourite blockbuster like Kushi, Bangaram. Sai Madhav Burra penned the dialogues for this flick. Actors like Niddhi Agarwal, Sunil, Subbaraju, Raghu Babu, writer-comedian 'Hyper' Aadhi are working on this film.
Download our app 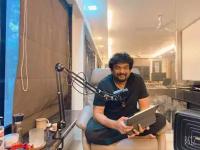