When do Politicians learn Not To Drag Women Into Political Fight?

The political rivalry between the ruling and opposition parties reached a point where the Chief Minister and former Chief Miniter are not ready to see each other. Even at the event hosted by the Honorable Governor, YS Jagan Mohan Reddy and Nara Chandrababu Naidu ignored each other and maintained distance.

Besides the intense political rivalry, state politics is also seeing an unwanted trend of involving women in politics. Earlier, the YCP legislators reportedly passing objectionable comments against Chandrababu Naidu's wife had shaken the state politics. A person with high stature like TDP chief Chandrababu Naidu cried unable to bear the comments aimed at her wife reportedly.

Besides the members of the Nandamuri family, a few Tollywood personalities also condemned what happened and said that it is not appreciable to bring women into politics.

When almost everyone forgot the issue, Chandrababu Naidu's son Nara Lokesh made the unexpected move. Hitting back at the ruling YSRCP for reportedly banking on the initiatives done by the Telugu Desam Party in the previous regime, the ex-Minister alleged that those who want to set up companies and firms in the state have to pay commissions to YS Jagan Mohan Reddy's wife Bharathi, Sajjala Ramakrishna Reddy and the Chief Minister too.

Nara Lokesh bringing YS Bharathi into the political spectrum did not go well with the ruling YSRCP and the legislators from the party are hitting back at Nara Lokesh and the opposition Telugu Desam Party.

IT Minister Gudivada Amarnath who is known for giving strong counter to opponents lashed out at Nara Lokesh and said that YCP has no history of doing politics by bringing women into politics. Breathing fire on Nara Lokesh, Gudivada Amarnath advised Nara Lokesh to settle his issues if he has any with his wife Brahmani by talking to Chandrababu Naidu and Nandamuri Balakrishna.

Reacting to Nara Lokesh's attack, Gudivada Amarnath brought Nara Brahmani into the issue. No one understands when politicians will learn women should not be grabbed into politics.
Download our app 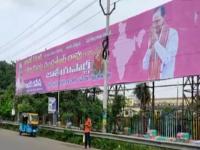