Director Mohan Krishna Indraganti is known for his feel-good entertainers filled with witty writing and classy narration. He made his entry with 'Grahanam' but it was 'Asta Chamma' that brought him a lot of fame. He went on to make memorable films like 'Golconda High School', 'Sammohanam', 'Ami Tumi', 'Gentleman' and others.

While his last outing 'V' turned out to be a disappointment, he is focusing on his next film 'Aa Ammayi Gurinchi Meeku Cheppali'. He collaborated with Sudheer Babu for the third time in this film and happening beauty Krithi Shetty is the heroine. The teaser and the first song came out long back but the release date wasn't announced till. Now, the makers have finalized a perfect date and officially released it with a poster. 'Aa Ammayi Gurinchi Meeku Cheppali' is arriving in theatres on 16th September. Mahendra Babu and Kiran Ballapalli are producing it under Benchmark Studios, in association with Mythri Movie Makers, while Gajulapalle Sudheer Babu presents it.

The poster showcases Krithi Shetty running while Sudheer Babu who plays the role of director is seen holding a megaphone and running beside her. As you can see the cameraman tracking her while others are following them. The poster looks fresh and quite interesting too. Let us see how the film is going to be.

Vivek Sagar is giving the music while PG Vinda handles the camera. Sahi Suresh is the film's art director while Marthand K Venkatesh is the editor. Apart from Sudheer Babu and Krithi Shetty, the film has well-known artists like Avasarala Srinivas, Vennela Kishore, Srikanth Iyengar, Rahul Ramakrishna and others playing important roles. The shoot of 'Aa Ammayi Gurinchi Meeku Cheppali' was already wrapped up and the film is presently in the post-production stages.
Download our app

Dulquer Delivering One Hit After Another!

A Lot To Learn From The Tamil Stars!

My characters are replete with innocence and old-world charm. Everyone can root to them: Lakshman K

Beyond The Fairy Tale: A Peek Into Nayan's Journey! 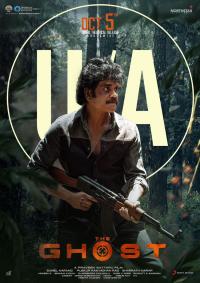 Locked & Loaded: 'The Ghost' Ready To Be Unleashed!
×