Hanu Raghavapudi is one name that is ringing all over the Telugu film industry right now. He is the man responsible for making one of the best and most beautiful love stories in the last decade or two. It has been a long time since a complete soulful love story was carved out in Telugu. 'Sita Ramam' is considered a classic on its first day itself and it speaks a lot about what the director managed to create.

Hanu has become the talk of the tinsel town right now. In fact, his last two outings were big commercial failures and brought a lot of bad name for him. While 'LIE' ended up as a disappointment, it was 'Padi Padi Leche Manasu' that made everyone believe that Hanu has a second half syndrome and his career was in serious danger after that film. No one believed that he would get another chance but it happened.

Vyjayanthi Movies banner believed in his potential and gave him a good budget along with a fantastic cast and crew. They did not compromise at all and believed completely on Hanu's script. Their belief turned out to be true and the director delivered a brilliant product in the end.

'Sita Ramam' is Hanu's best work without a doubt and many say that he may not recreate this magic again. His first two films 'Andala Rakshashi' and 'Krishnagaadi Veera Prema Gaadha' were termed as good films and did decently on the commercial front too. But they never satisfied the audience completely.

His third and fourth films were outright disasters. Many say that his stories are well written and he narrates the film brilliantly till a point with a lot of feel but ends up destroying all his good work in the second half. He faced a lot of criticism for that and mentioned in the pre-release event of 'Sita Ramam' that he rectified his mistake. He was not lying about this as the film is being lauded by a lot of people now.
Download our app 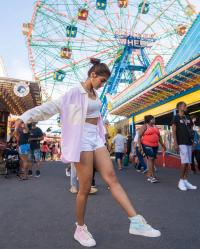