The fifth episode of the popular chat show 'Koffee With Karan' is out now and it had Aamir Khan and Kareena as the guests. In its seventh season, the 'Ae Dil Hai Mushkil' director brought out a lot of interesting answers from Alia Bhatt, Ranveer Singh, Sara Ali Khan, Janhvi Kapoor, Akshay Kumar, Samantha Ruth Prabhu, Vijay Deverakonda and Ananya Pandey. Karan Johar embarrassed a lot of them with loads of questions about their relationships, affairs, fantasies and sex lives.

No matter who the guest is, Karan Johar never stops questioning on these things and he did the same with Aamir Khan and Kareena Kapoor Khan too. As everyone knows, Kareena is a very good friend of Karan Johar and she came to this show every season. She arrived with her colleagues, ex-boyfriends and partner. She makes interesting comments every time she is on the show and they make it to the gossip columns indefinitely.

Kareena is married to Saif Ali Khan and is a mother of two beautiful kids now. Karan tried to bring a juicy answer from her once again by posing a question about her sex life. He asked, "Quality sex after babies is a myth or reality?" Kareena immediately asked Karan to be careful as his mother is watching this episode. Aamir jumped in and asked Karan, "Would your mother doesn't mind if you talk about other people's sex life?" Karan had no reply to this question.

Apart from that, Kareena complained about how much time Aamir takes for each film. She said that Akshay Kumar wraps up his films within a month while Aamir Khan takes around 100-200 days. She even gave minus ratings to Aamir's fashion sense.

As we are aware, Aamir Khan and Kareena Kapoor previously acted together in '3 Idiots'. They will be seen onscreen together once again in 'Laal Singh Chadda' which is releasing on 11th August. Naga Chaitanya is playing a supporting role in this flick while Megastar Chiranjeevi is presenting it in Telugu. It is an Indian adaptation of Tom Hanks' classic film 'Forrest Gump' which came out in 1994.
Download our app 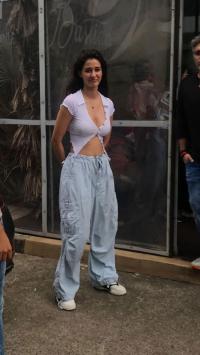