Why is the TRS praising NTR?

What explains the sudden love of the TRS towards legendary NTR? Recently on her US tour, TRS MLC and KCRâ€™s daughter Kalwakuntla Kavitha has praised NTR saying that he brought global recognition to the Telugus. Though she made these comments at the American Telugu Association (ATA) meet, those in the know say that there is a well-thought out plan behind the praise of NTR.

This is not the first time that the TRS has praised NTR. Recently on the 100th birth anniversary of NTR, all the Kamma MLAs and those who joined the TRS from the TDP went over to the NTR ghat on the Tank Bund and offered floral tributes. Several other TRS leaders have praised NTR in recent times.

Political pundits say that the TRS feels that along with the Muslim vote, the vote of the Andhra settlers is also very important for the party if it wants to win the 2024 elections. The Andhra settler votes play a key role in Hyderabad, Rangareddy and Khammam districts and also few more seats in Mahabubnagar, Nizamabad and Adilabad.  Kamma community leads the Andhra settlers and hence the TRS has decided to resurrect NTR.

Speaking in Washington DC after inaugurating the Telangana pavilion, MLC Kavitha said that ATA is actually Andhra Telangana association. She harped on the unity of the Telugus.  Ever since it came to power, the TRS has been trying to win over the Andhra settlers in Telangana. Political pundits also feel that the settlers are also of the opinion that the TRS dispensation is good for them.
Download our app 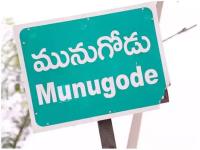