Another young hero is all set to make his debut in Telugu cinema in the form of Ganesh, brother of Bellamkonda Sri Srinivas, who is busy with his Bollywood debut, the remake of Prabhas starrer Chatrapathi. Ganesh's debut film is titled Swathi Muthyam which is in the last leg of shooting.

After creating positive buzz for the film with posters and song promo, the nakers upped the game in promotional activities. The lyrical video of the first single Nee Chaaredu Kalle was released just a while ago which looks promising. Singers gave life to the lyrics with their soulful singing.

Music director Mahati Swara Sagar created magic with his melody. The lead pair Ganesh and Varsha Bollamma's sizzling chemistry is the highlight of the lyrical song. The pair look cute together.

Lyric writer Krishna Kanth has done magic with his pen by penning down beautiful lyrics describing the feelings of Ganesh and Varsha Bollamma against each other. Armaan Malik and Sanjana Kalmanje sang the song impressively. The picturization gets good marks here.

Ganesh isn't looking like a debut hero and his facial expressions go in tune with the lyrics. Actress Varsha Bollamma, known for her first next-door looks, is looking cute on screen.

The stunning visuals were captured by Suryaa. We have to wait for the film's release to experience some more vibrant visuals captured by the Cinematography. Editor Navin Nooli needs a special mention here for his color grading for making the visuals look cinematic.

Swathi Muthyam is directed by Lakshman K Krishna and produced by Suryadevara Naga Vamsi under Sithara Entertainments. The upcoming film is slated to release on the 13th of August.
Download our app 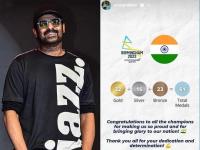