Balakrishna made the most of Venkatesh and Nani's missed opportunity

Nandamuri Balakrishnas celebrity talk show on Aha Video  Unstoppable is hands down the most successful OTT show in recent times. The show has garnered a stellar viewership largely thanks to Balakrishnas trademark mannerisms and his unfiltered conversations with the guests on the show.

But as per reports Balakrishna wasnt always the frontline choice to host Unstoppable. In fact Aha Video management approached tow other stare before they knocked on Balakrishnas door.

Apparently Aha Video initially approached Venkatesh Daggubati and Nani to host the show. But they were rejected. Venkatesh cited the Covid situation for his reluctance to come on board and Nani was occupied with his back to back films.

Allu Aravind then sprung to action and he got in touch with Balakrishna. After listening to the core idea Balakrishna got excited and he readily came on board for Unstoppable.

But now it needs to be said that Balakrishna is the right man for Unstoppable. His no-nonsense attitude unfiltered conversations and dynamic presence are the USPs of the show and he single handedly upped the ante.
Download our app

Why Is Mahesh's Film Releasing So Quickly On OTT?

Video Song: Pooja Sizzles With Her Glamour In This Party Number! 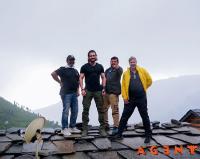