Team RRR has amped up the promotional campaign. The stage is set for the arrival of the film's trailer and here is a big update on the same.

"GET READY to witness the TRAILER of INDIAâ€™s BIGGEST FILM, in Theatres at 10 AM and on Youtube from 4 PM  tomorrow," the statement from the makers of RRR makers.

This is the first time in the history of Telugu cinema that the trailer of a big-ticket Telugu film is releasing first in theatres and only then on YouTube.

The trailer will be releasing in all the major Indian languages and the stage is set for the same.

It is said that the trailer will feature high octane action blocks and as well as stunning visuals. It will be high on emotional value as well.

RRR is arriving in theatres on the 7th of January. The film marks the coming together of Ram Charan, Jr NTR, Rajamouli, Alia Bhatt, Ajay Devgan, and DVV Danayya.
Download our app 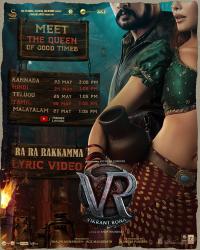