The makers of Pawan Kalyan and Rana's Bheemla Nayak have unveiled a new song from the film's audio album. Titled 'Adavi Thalli Maata', this is a deep and intense song.

Adavi Thalli Maata, as the title suggests has a rustic vibe to it. It gives the nature's perspective of all the human emotions, rage, and the masculine urge to destroy their opponents.

Ramajogaiah Sastry's lyrics have deep value. The conflict point between Pawan Kalyan and Rana is presented in a metaphoric manner with this song.

Also, the lyrical video starts off with a tribute to renowned Telugu lyricist Sirivennela Seetharama Sastry.

We also get a glimpse of the central characters in the film, played by Pawan Kalyan, Rana, Nithya Menen, Samyuktha Menen, Samuthirakani, and others.

Bheemla Nayak arrives in theaters on the 12th of January 2022. The film is directed by Saagar K Chandra and produced by Sithara Entertainments. Trivikram is penning the dialogues and screenplay.
Download our app 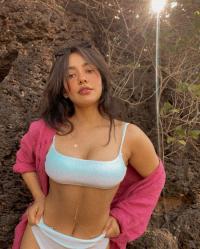