Will RRR team go to High Court for ticket prices?

Andhra Pradesh government has decided to pass the new Cinematography Bill that won't allow theatres in AP to screen benefit shows and extra shows. Even ticket rates hike was not granted for big budget films by AP Government.

Minister also commented that the audiences are finding it hard to afford ever growing prices and government is concerned about regular audiences watching films at theatres. He said that their move will help struggling theatres to survive as well.

RRR film is coming on 7th January with Jr. NTR and Ram Charan as leads and with a budget of Rs. 350 crores. The price tag is horrifying for distributors and if there is no price hike allowed, the cost recovery will be delayed and it has to survive onslaught of big budget film releases like Bheemlanayak, RadheShyam, Kedi and Acharya for the next four weeks.

If film does not manage to get a positive word of mouth due to any reason, film will end up burning pockets of many distributors, exhibitors leaving huge gaping holes for other films to fill up.

So, at least for extra shows and price hike, during the first two weeks of release, RRR team can go to AP High Court and get it granted. But that will pit them against government which is not an ideal situation for Rajamouli and others involved in long run of things.

AP is a lucrative market for the film to aim for recovery in other states and languages. Ram Charan and Jr. NTR are big stars in Telugu states and command major pull in AP areas. If they fail to register good returns here, then that will be a gaping hole and negative remark in their filmography forever.

What will Rajamouli and team do now? They have been trying to ask Pawan Kalyan to shift his film Bheemlanayak release from 12th January to another date. Now, it looks like they have fight with AP government as well. Will they do so? Let's wait and watch. 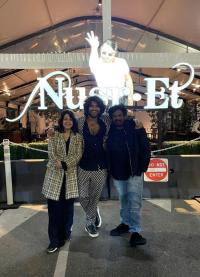 Liger Team Having A Blast In The USA
×