Manchu Vishnu is having all the happiness. He had contested his maiden Movie Artistes Association (MAA) elections and went on to win the President post. He recently took oath as the MAA President along with his panel members.

Days after taking the oath, Vishnu reached the holy shrine of Lord Venkateswara, Tirumala to offer his prayers to the deity. He was accompanied by his sister Manchu Lakshmi during his Tirumala visit. Manchu Mohan Babu and Vishnu's panel members also visited the holy shrine.

Amid reports of differences between Manchu Vishnu and Power Star Pawan Kalyan, Lakshmi said there is no truth in the news. We don't have any issues in MAA and we all are together, she said.

Lakshmi said Pawan Kalyan and Vishnu spoke to each other at the programme. With a picture of Vishnu and Pawan, a lot is being said on social media. Why is such news being spread, Lakshmi asked with a serious tone.

Talking about Vishnu's stunning victory in the MAA elections, Manchu Lakshmi said, people in Andhra Pradesh and Telangana wished for Vishnu's win and with their blessings, Vishnu won the elections. I would like to thank one and all who supported Vishnu in this regard. Now we came here to seek the blessings of the god, she said.

The other day, Pawan Kalyan and Manchu Vishnu were present at Alai Balai hosted by Bandaru Dattatreya. At the programme, Pawan reportedly ignored Vishnu even when he tried to have a word with him. Pawan Kalyan fans widely shared the pictures on social media.
Download our app

Comments we make should not affect Industry Manchu Vishnu

Liger Team Having A Blast In The USA 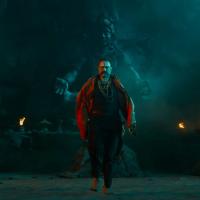