Nani29 Announcement On The Way

Nani29, which will be Nani's immediate next project after his ongoing project Ante Sundaraniki is set to be announced very soon.

Nani took it to social media to unveil a concept poster of the film.This poster confirms that more details about Nani29 will be out on the 15th of this month.

The poster carries a dark theme in the background and it appears to be that the film will be an action-oriented one, as implied in the poster.

There is no affirmative update so as to the director of the project or the cast and crew. We might have to wait till the 15th of this month to get more details about the same.

Nani is currently filming for Ante Sundaraniki which has Nazriya Nazim in the female lead role and is being directed by Vivek Athreya. 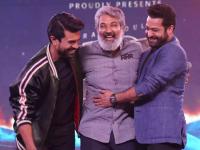 Is This The Scene Rajamouli Referred To In 'RRR' Promotions?
×