According to some media reports, the web series is conceptualized in a way that provided the athletes a chance to look back at their careers and reminisce the memorial moments in their careers.

If we have to take anything from the media reports, the  Olympic silver medallist has expressed her happiness over presenting the 'The A-Game' that will give an insight into how the athletes will react to high-pressure situations.

The web series is likely to feature five Indan athletes and relive the historic moments across the sports. In every episode, each athlete will recreate the iconic moments in their career. 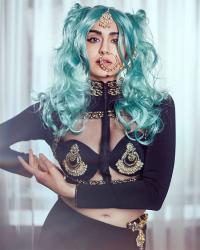