Hilarious Trolls On Prabhas Next Projects!

Star hero Prabhas might be the only hero in the entire nation who announced back-to-back projects during the lockdown period. He is currently working on 'Radhe Shyam' which is expected to release in summer 2021. He announced a huge film titled 'Adipurush' directed by Om Raut. It is based on our mythology Ramayan. He even gave his green signal to Nag Ashwin's massive film which will be based on the time-traveling concept.

While fans are overjoyed with his line-up, the common audience are not sure about the amount the time these three projects are going to take. Prabhas is known for taking a lot of time for each project and these three films involve a lot of budget and graphic work which is making everyone wonder about how much longer these projects need.

Pointing out that, a few creative memers have posted some funny trolls about it. They are sarcastically saying that a couple can watch 'Radhe Shyam' during the time of their honeymoon and can watch 'Adipurush' after they had children. Coming to Nag Ashwin's untitled film, they are hilariously suggesting that their children can take them to this movie if we are alive till then.

This post is genuinely funny and shows us the delay in Prabhas' projects by exaggerating a bit.
Download our app 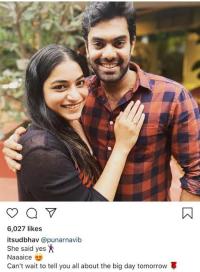