A man's devious plan to dupe his wife and enjoy with his girlfriend has gone bust in the most unexpected manner. He ended up being caught with his paramour and with his pants down.

Aa person working in a private company in Mumbai called up his wife on June 24 and told her that he would die as he tested Corona positive. Sounding very suicidal, he then switched off his mobile phone. The hapless woman felt he was committing suicide and rushed to the police with a complaint. The police began looking for him based on the location of his last call. During the searches, they found his bike and other belongings near a water talk. Thinking that he may have jumped into the talk, they conducted a thorough search. But they found nothing. This led to the suspicion that he was faking his death.

Later, the CCTV footage in the area near the tank showed that he was enjoying the company of another woman in a car and was also seen crossing the borders of the state. He was nabbed from Indore along with his paramour and was handed over to his shocked wife.

The man is identified as Manish Mishra. He is working as a supervisor in a private company. 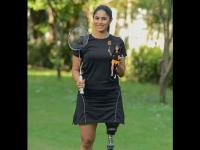