Battle Of Brahmins In TRS

Who will win in this battle of the Brahmins in Telangana? With KCR almost deciding that at least one of the three Governor-nominated MLC seats should go to a Brahmin candidate, there is a stiff competition among the Brahmins in the TRS.

If sources are to be believed, there are at least two major Brahmin contenders for the slot. They are OSD in Telangana CMO Deshapati Srinivas and Vani Devi. While Vani Devi is the daughter of former prime minister PV Narasimha Rao and runs a finearts college in the city, Deshapati has been a Telangana activist for decades. He was an active associate of KCR and has participated in several protest programme.

KCR, a lover of good Telugu, liked Deshapati and made him an OSD in his office. However, Deshapati and his close associates always felt that he was fit to be an MLC. So, he has been actively lobbying for the post. Vani Devi is also important as KCR wants to take away PV Narasimha Rao's legacy from the Congress Party.

PUBG In Talks With Reliance Jio To Resume Operations In India

India Has Highest Coronavirus Recoveries In The World

TDP Is Orphaned In This Key Assembly Constituency 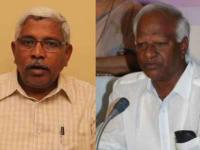 Will It Be Kadiyam Vs Kodanda?
×