Is This The Remuneration Of Mega Star?

Megastar Chiranjeevi has made a comeback with 'Khaidi No.150' in the direction of VV Vinayak. The movie was produced by Chiranjeevi's son Ram Charan under their home banner Konidela Prouction Company.

There were speculations going on in Tollywood circles as to how much remuneration The mega star would bank on. The 151 film was the magnum opus 'Sye Raa' directed by stylish director Surender Reddy and was the first venture of the Megastar targeting the Pan India audience is also home production and thus there was no talk at all about his pay cheque!

Now for the 153rd film at least people thought that Chiru-Aravind would collaborate but that too didn't happen. The 153rd film 'Acharya' is yet again presented by Ram Charan under Konidela Production Company and is produced by Matinee Entertainments. The film is directed by Koratala Siva.

For Aacharya Chiru is said to get a pay cheque of 50 Crores which is equal to the present day stars Prabhas and Mahesh. It is evident that Prabhas has emerged the highest paid actor in India with Nag Ashwin film for which he would get 100 Crores!

Can This Star Son Pull Off Big Budget? 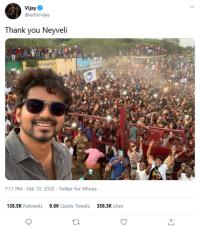 Thalapathy's Neyveli Selfie Is The Most Retweeted Picture
×