The news of Bachchan family testing positive for Coronavirus has shocked everyone. Barring Jaya Bachchan, all members of the family including Amitabh, Abishek, Aishwarya and Aaradhya got tested positive. Big B and Abhishek were admitted to the hospital while Aish and her daughter were home quarantined. Even prolific actor Anupam Kher's family was infected with the virus. We already heard that the housemaids and staff of big celebrities testing positive for virus which made the stars to self-quarantine themselves.

After the Bachchan's, the focus of the public shifted towards another big family in Bollywood. The news of Kapoor family getting infected by the virus is going viral on the internet from the past few hours. Fans started to worry about Ranbir and his family. Finally, Riddhima Kapoor responded on this rumour by saying that they are completely false.

She said that all the family members are fit and healthy. She added that these are mere speculations which are completely untrue. This news came out as Amitabh's family attended a birthday party recently hosted by the Kapoors. With the Riddhima Kapoor clearing all the doubts, fans had a huge sigh of relief. On the work front, Ranbir Kapoor is working on big-budget epic film 'Brahmastra'.
Download our app 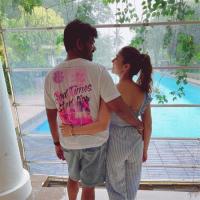