Maverick director Ram Gopal Varma is churning out one film after the other these days. He is not working on the content but looking at films as a mere business opportunity as he announced more than half a dozen films during the lockdown period.

The poster itself makes it clear that Varma is only again using his formula of mixing adult content with some spooky elements along with his trademark camera angles and loud background score. The most interesting part of this poster is that it says music is given by legendary MM Keeravani. The 'RRR' music composer lastly gave music for RGV for 'God Sex Truth (GST)'.
Download our app 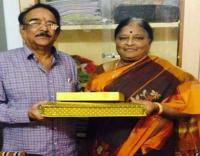