The milky beauty Tamannaah is in the news yet again as speculation surrounds her that she is going to be seen in a web series as per the new trend in Film Nagar.

As we wait for full clarity about her upcoming projects, the actress shared a chat with media sources about her journey so far. The actress expressed her joy being part of prestigious film Bahubali and working with its director SS Rajamouli. She said that he never offers a role just to his contacts but for the role in his mind and you perfectly fit of you get the call she ended.

On the film front, Tamannaah is acting as a Kabaddi Coach in the film 'Seetimaar' starring alongside Gopichand. The movie is directed by Sampath Nandi. The movie needs a lot of endurance and fitness in Tamannaah for which she is actively maintaining diet and has even attended training sessions for the game that she never played.

Tamannaah is working in the film 'Bole Chudiyan' alongside Nawazuddin Siddique. This is yet another stint of Tamannaah in Bollywood. Let's see if she can make it big in Bollywood this time. 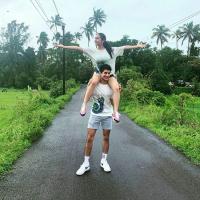