One of the main reasons for the success of 'KGF' is the lack of expectations from the audience. People did not know what to expect from this movie and they were blown away after watching it. They liked the film's presentation and action sequences immensely that they ignored the over the top hero elevations that arrive every 10 minutes.

But that will not be the case of 'KGF 2'. The team has to make the film very carefully and there are reportedly under a lot of pressure. Inside sources claim that the prequel has a lot more introductions and elevations than the first part which is catered directly to the masses. But these elevations may not entertain the general and North audience which is why the team is reportedly spending hours in the editing room trying to trim those unnecessary scenes.

Experts say that the film may get massive openings due to the success of the first installment but there is a huge chance of the film running into losses in all the regions barring Karnataka if it fails to impresses. This pan-Indian film is coming with a lot of expectations and let us see if this team delivers a winner once again.
Download our app 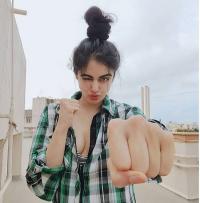