Talented actress Priyamani is celebrating her 36th birthday today and she is still going strong in the industry. She is playing the female lead in Victory Venkatesh's upcoming film 'Narappa' directed by Srikanth Addala. This film is a remake of Tamil super hit film 'Asuran' starring Dhanush and directed by Vetrimaran.

On the occasion of her birthday, the team of 'Narappa' released the first look of Priyamani. The actress is seen with a glowing smile and is sitting on a cart. Her attire and makeup looks perfect as she is playing the role of a village woman who takes care of her family. They wrote, "Wishing the extremely talented @priyamani6 garu a very Happy Birthday & an year filled with success!!  @VenkyMama #SreekanthAddala @theVcreations @SBDaggubati @sureshprodns #Narappa."

The poster showcases that the makers are staying true to its original and giving importance to authenticity. Produced by Suresh Babu and Kalaippuli S Thanu, 'Narappa' is marking the return of Srikanth Addala after a disaster like 'Brahmotsavam'.
Download our app 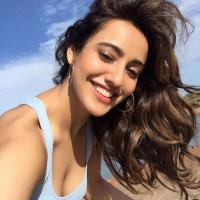