Superstar Krishna after the demise of his love Vijaya Nirmala is trying to get back his self and is visiting the movie sets of his family stars and thus finding solace in his times of distress. Galla Jaya Dev is producing his son's debut film and the movie unit recently released the teaser of the first song from the debut film of Galla Ashok.

For the first time in the recent years all the family members including Superstar's wife Indira visited Krishna in his Nanakramguda house and spent some good time with him. Almost all the family is present but Superstar Mahesh and his family was missing in the picture. Krishna's daughters and their families including actor Sudheer Babu and Sanjay Swaroop were present. Even Krishna's brother Adi Seshagiri Rao was seen in the picture.

Recently, the legendary actor Krishna has turned director for his grandson Galla Jayadev's debut film when Superstar happened to visit the sets of the film and tus on the insistence of the film director Sriram Adithya Superstar has directed a scene.
Download our app 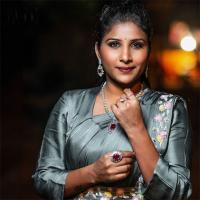