In the past few years, a lot of star kids made their debut in Bollywood and major credit goes to Karan Johar for launching them. More than the heroes, a lot of new heroines like Janhvi Kapoor, Sara Ali Khan, Ananya Pandey, Tara Sutaria and others entered the industry.

With a lot of young heroines in the picture, the competition is severe between them. Alia Bhatt who came just like these star kids, became one of the biggest star heroines in Bollywood right now. The younger lot wants to follow her path and lined up some interesting films.

Sara Ali Khan already has a huge following because of her stunning looks. Also, she scored a super hit with 'Simmba'. She is acting alongside crazy hero Varun Tej in 'Coolie No.1' and is doing some other interesting projects. Ananya Pandey, on the other hand, is part of Vijay Devarakonda's 'Fighter' directed by Puri Jagannadh and even scored a hit with 'Pati Patni Aur Woh'.

Janhvi has a lot of craze among the public due to her fashion sense. She made her debut with 'Dhadak' which was a decent hit and this daughter of Sridevi lined up some interesting projects but her plans to become a star heroine were affected by the ongoing shut down of theatres.

Most of the Hindi films are looking at release opportunities through OTT platforms and two of her films like 'Gunjan Saxena' and 'Roohi Afza' are expected to have a digital release. She pinned a lot of hopes on these two films and not having a theatrical release for two of her films will surely have an effect on her career. This unexpected turn of events is said to be worrying Janhvi Kapoor.
Download our app 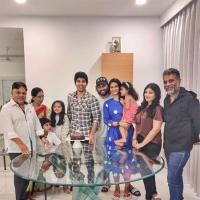