Young hero Vishwak Sen is always known for his speed and over-enthusiasm which landed him in trouble so many times. He tried to follow the trend created by Vijay Devarakonda and went overboard with â€˜Falaknuma Dasâ€™ which created a lot of controversies.

His speeches also create a lot of buzz on social media due to some of his unnecessary statements. Keeping all this aside, he released a special song as a tribute to Jr. NTR.

He stated it as a tribute to Tarak but he elevated himself a lot in this song. People started to wonder whether it is about the star hero or Vishwak. The song did not get the desired response but it landed in a controversy.

According to music composer Vivek Sagar, the tune used in this tribute video was a track developed by him during â€˜Falaknuma Dasâ€™ but he kept it out of the film due to some reasons.

Now, Vishwak is said to have used this tune without taking the permission of the music director which triggered Vivek Sagar. He asked Vishwak to take that down several times for which the young hero did not listen. Angered by this, Vivek Sagar wrote commented on the comments section below the video and slammed Vishwak. Looks like Vishwak follows controversy wherever it goes.
Download our app 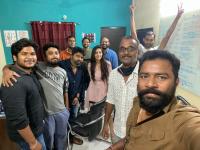