None denies the fact that Sukumar and Devi Sri Prasad's combination is a super hit one. Since from starting of the Sukumar's career, from Arya movie to now Pushpa movie, all his music is composed by Devi Sri Prasad.

There is a special bonding between them which makes Devi to give fabulous music for Sukumar's films. The hero of Sukumar's films may changes with movie to movie, but the music director remains unchanged.

A couple of days ago, Devi released a CDP for Allu Arjun's birthday. Today on the occasion of Bunny's birthday, Sukumar & Team released the first look and title of the film. With this, the news is confirmed that Devi is giving music to Pushpa film.

Allu Arjun's mass and intense look impressed the audience largely. Sukumar is making this film on the basis of Red sandal smuggling, and Stylish star will be seen as a lorry driver in the film. 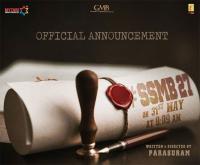