Kannada Star Hero Upendra Rao had debuted to the film industry in 1989 with Anantana Avantara film. Since from then, Upendra has acted in ten's of films in Telugu and Kannada languages. Upendra has also written and directed many films in both the languages. In Telugu, he recently played the negative role in S/O Satyamurthy, and mesmerised the audience with his acting.

This ace actor is coming up with good roles in Telugu, along with the lead roles in Kannada.

Now the sources have confirmed that Upendra is ready to play the complete negative roles in the movies.  Upendra perfectly fits in any character as he is having a unique acting talent. So, we have to wait for those lucky filmmakers who will be using this golden chance from Upendra.

Will Pawan Reduce His Remuneration!

Suma Kanakala Not Part Of Pushpa?

This Is Why 'V' Couldn't Release On OTT

Exhibitors Have To Make This Promise To Audience 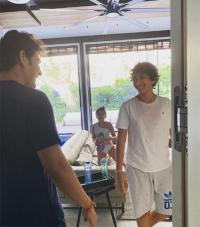 Sitara Left Out In Mahesh And Gautam's Conversation
×