The Mega Power Star Ram Charan is all set to ring in his 35th birthday tomorrow. This is the first time Ram Charan celebrates a dull birthday thought his fans. To brighten up things for all the mega fans, Team RRR has a surprise in store for Ram Charan. Tomorrow at 10 am Jr NTR is going to unveil the surprise on his Twitter handle.

Now the fans across the nation are going crazy and are feeling most excited for the surprise. Fans are expecting a full glimpse of Ram Charan in this video surprise. Fans have a disappointment in the motion teaser for Ram Charan was not distinctly visible.

Ram Charan who catapulted to fame with hits like Maga Dheera, Nayak and Yevadu has registered a strong fan base and thus became an apt successor to Megastar Chiranjeevi. This is the first time two big stars of Tollywood Jr NTR and Charan are coming together for Rajamouli's big film. Hope this film takes Charan and NTR to great heights and give them the much needed Pan India image.
Tupaki. Com wishes Ram Charan A Happy Birthday. 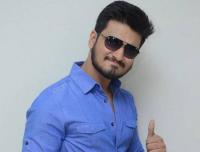