In what it could be a shocker, Indians coming from the foreign countries are using various methods to lower their temperature to escape from the screening tests at Shasmaad Airport.

Recently the Indonesians who came to Karimnagar took Paracetamol even though they are suffering from cough, fever, and cold. They feared that if they test positive for the deadly virus, they will be sent to isolation wards.

'Most of my co-passengers in a flight from Heathrow were students from various universities in England. They took paracetamol tablets just an hour before the landing to avoid getting 'caught' in thermal screening done at the airport to isolate coronavirus infected passengers,' a passenger said.

TDP, A Divided House In Anantapur

Why Is BJP's Confidence Growing In Telangana? 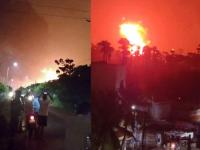 Vizag Goes Through A Series Of Blasts
×