In what it could be a shock to the political parties in Andhra Pradesh the constitution bench of the AP High Court has heard the arguments of both sides and looking at the situations it seems to be get postponed again.

This is the second time the court heard the petitions. It all started with the petitioner moving the High Court stating that the reservations in the local body elections have exceeded 50% and quoted the verdict given by the apex court in the K. Krishnamurthy vs Union of India case that the reservation policy prescribed for the composition of elected local self-government institutions should not exceed 50%.

The state advocate general had opposed this and said that under special circumstances reservation percentages can be increased.

With both the parties defending their pleas with the previous verdict and quoting the laws the High Court decided to observe the case very keenly and kept the verdict on hold which is quite shocking.

This development from the Court has left not only the political analysists but also the political parties in a shock. On the one hand, the parties have kept themselves busy in how about going for the local body polls.

On the other hand, the Court kept the verdict on hold. Until the court delivers any verdict further actions can be done. So letâ€™s wait and see what the Court has to say on this issue.

What Locals Think About Covid-19 Deaths In Wuhan

After IPL, Tokyo Oplympics Postponed Due To Covid-19

One More Disappeared Doctor Who Warned About The Virus

WHO Clariy On Covid-19 Transmitting Through Air 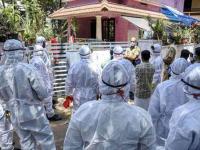