Kiara Advani did shock many by only putting a leaf in front of body as a cover. But many thought it had artistic value to how nude photos are shot.

Later, it is revealed that Kiara Advani did wear costumes to cover her private parts and the photographer Daboo Ratnani used editing skills to give us the final result.

Her underarms, waist and even cheeks were "corrected" digitally using editing softwares. We can say this too by looking at her other photos and original BTS pics.

Now, the latest allegations on the photo are that it has been plagiarized. Daboo used same concept that Marie Barsch used in his famous photography with a color skinned model.

Copyright laws might say it is a copy or an inspiration. But people are calling Daboo as a copy master as the news broke on social media.

Well, in photographs or even in today's films remixs or remakes are working. So, this might be called a "remake" than a copy by Daboo in the end. 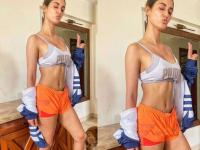