Pic Story: In a Bid to be Miss India, Mahanati is Losing Her Natural Charm!

Rakul Preet Singh fell into a trap of looking like Supermodel and super thin after entering Bollywood. That changed her career progression so much that she decided to stay away from Telugu films for a while.

Another naturally charming actress, Keerthi Suresh seems to have fallen prey to changing her looks. Her latest images lack the old spark in her smile and eyes.

She looks too weak and too lean, as well. She created a great impact on Telugu audiences as Savitri and too just present herself differently in Miss India, she changed her looks.

While, as per health, she might be feeling much better than her chubby days, but as an actress if she looses the charm, then people won't be able to accept her.

Anushka faced such problem with her weight issues and she needed to take almost 2 years to sort them out. Nayantara found some youth serum to look better than her early days with each passing day but not everyone is as lucky.

We hope not to lose Keerthi kind off a talent to these weight measurements that some try to impose on every person. 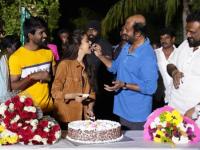