Daughter Kills Her Mother After She Slapped Her

In what it could be a shock a minor girl was arrested along with her male friend who is in his late teens by the Ghaziabad police for reportedly killing the girl's mother. Reportedly the mother of the minor girl has slapped the girl after knowing their relationship.

The cops said that the minor girl and her boyfriend threw chilly powder into the mother's eyes and later the duo has strangled the mother with a rope.

The mother of the girl was a head constable who worked with the Delhi Police Department. Her husband who was not in Delhi when this horrifying incident took place registered a complaint with the police and in his complaint he termed his daughter and her friend as the perpetrators.

"On February 14, Jitendra met the girl at her house to celebrate Valentine's Day. When her mother found out, she slapped her in anger. The woman then went to Jitendra's house and complained to his parents. When his parents found that he was not home, the woman asked them to send him to her house when he returned," an officer said.

"Meanwhile, the girl had spoken to Jitendra on his mobile phone and they planned to throw chilly powder into her mother's eyes to avenge the slapping incident. When Jitendra arrived, the woman slapped Jitendra as well. After this, the girl brought chilly powder from the kitchen, which they both threw on her mother's face," the officer added.

After questioning, the girl and the boy have admitted their crime and surrendered the rope, grinding stone and chilly powder packed used by the duo.
Download our app

US Reports Highest Single-Day Deaths With 1,500

America Continues To Get Affected by COVID-19

Around 42,000 People Traveled With Tablighi Attendees?

Are Collectors Unhappy With Govt's Soft-Pedaling Of Tabligh Attacks on Doctors?

Work-From-Home to Become The Norm Even After Lockdown

National Grid to Collapse With Shutting The Lights Off on Sunday?

Why Diggie Raja Switched Off His Phone? 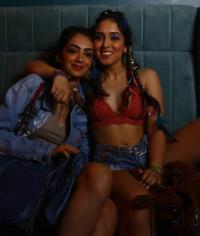