Anasuya To Appear In A Negative Role For Vijay!

Vijay Devarakonda is producing another film on his production banner, King of the Hill Entertainment, and this time he is again roping in one of his first film, Meeku Mathrame Cheptha stars.

You might have guessed it already with the title and it is like playing Hide and Seek in a open ground under flood lights to write so much about it. Yes, it is popular anchor, Anasuya.

Even though she has very little number of call-sheets free these days as she is busy with multiple shop openings, shoots and TV events, the actress has agreed to star in the film, it seems.

She is ready to give them call-sheets by adjusting few shoots and also, asked them to not ask her any extra as she will be giving top priority to Sukumar's film.

She is working with for Rangamarthanda in the direction of Krishna Vamsy and after that film, she will join Sukumar's film and for that she is ready to loose one or two schedules of Jabardasth and Local Gangs, too.

She agreed to act in this new film, purely based on the script and the treatment she received from staff of VD, during their previous film, it seems. This will be a full blown negative role and the actress is excited to start shooting, say reports. Stay tuned for more updates.

Why Is Vijay Not Donating Money?

Nikhil Gets Ready With A Chiselled Body For 'Karthikeya 2'! 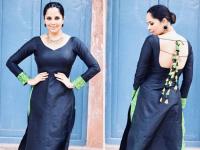