Alia Bhatt will soon start shooting for RRR in the direction of SS Rajamouli. She is playing Seetha paired opposite Alluri Ramaraju played by Ram Charan.

The movie is more about Ram Charan who is playing Ramaraju and Jr. NTR, who is playing Komaram Bheem, journey from youngsters to freedom fighters, we know.

Alluri Ramaraju decides to change his name Alluri Seetharamaraju as his decision to renunciate everything even marriage and join Indian freedom movement, prompts Seetha to commit suicide, who is deeply in love with Ramaraju.

So, Alia's character in RRR has that emotional baggage that only a well-versed actress like her can carry in short amount of time.

Well, the young actress turned up to Filmfare awards 2020, in the most sexiest outfit she wore till date. She was welcomed on the red carpet with many jaws dropping looking at her. She also won award for her performance in Gully Boy.

In Hindi Cinema, she completed shooting for Brahmastra with beau Ranbir Kapoor, shot for Sadak 2 and shooting for Sanjay Leela Bhansali's Gangubhai Khatiawadi, all scheduled for release in 2020.

Nagababu Hits Millions With The Help Of Balayya 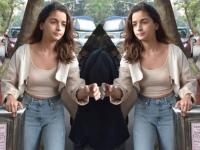