Harish Shankar found major success with remakes than his original stories. He did deliver successful films like Mirapakay and Subramanyam For Sale but Gabbar Singh, Gaddalakonda Ganesh showed that he has a good talent in handling remakes.

His Duvvada Jagannadam remained an Above Average fare and Ramayya Vasthavayya ended up as a disaster. Hence, big heroes haven't been giving him dates as much as he should be getting after a success like Gabbar Singh.

Changing all that, Pawan Kalyan has decided to give him #PSPK27 in the production of Mythri Movie Makers and now, Harish will direct Megastar Chiranjeevi too.

The director confirmed it himself and trade is predicting that the movie could be fourth production of Ram Charan with Megastar in association with Geetha Arts.

Megastar liked Lucifer, Malayalam Industry hit film starring Mohan Lal - written and directed by actor Prithviraj Sukumaran, and bought the rights of the film to remake it in Telugu. As Allu Aravind wants to produce a film with Megastar after his return to films from politics, he might join Konidela Productions as a partner for this one, it seems.

Ram Charan who had to oversee many things as a producer while handling Khaidi No. 150 and Sye Raa Narasimha Reddy productions, wants to give this film to young members of the team with Allu Aravind as guiding force, it seems. He wants to concentrate on his films as an actor more after RRR, therefore, the partnership like he accepted with Matinee Entertainments for Chiru-Koratala film could be in place for this one too.

As Geetha Arts also have plans to go Pan-India with next big productions, Lucifer remake could be their best bet with Chiranjeevi, it seems. Well, Harish only confirmed that he will direct Megastar Chiranjeevi but we don't know if that will be the remake of Lucifer as Sukumar is said to be writing the script in Telugu. Until, the official announcement is made, everything is a speculation, only! 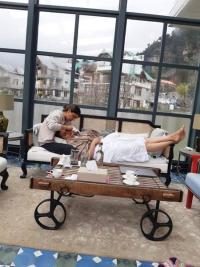