Dusky siren Shriya Saran got married to a foreigner named Andrei Koscheev in 2018. She never spoke about it publicly and stayed calm over the rumours surrounding her. She later confirmed that she got married but her wedding pictures never came out on the internet.

Wishing her husband on Valentines Day, she finally revealed her marriage photos through her official Instagram account. Looks like she got married in traditional Indian style in front of her close family members. The wedding was an intimate affair and no one really knew about it until the very last day. She wrote, "Love you forever and ever." This explains the love she has towards her husband Andrei.

Shriya made her debut in Tollywood in the early 2000's and she managed to maintain her beauty even now. Even at 37 years of age, Shriya could a give a lot of young actresses a run for their money. Shriya's last film was 'Veerabhoga Vasantharayalu' which was a failure. She is rumoured to be a part of Balakrishna's next film. She recently confirmed in an interview that she is doing a small role in the most prestigious 'RRR'.
Download our app

Jr NTR#31 With This Young Director?

Hospital Under Construction For Prabhas

Praises on NTR and Trolls on Pawan!

Who Looks The Best In Floral Saree?

A Telugu Film on Corona To be Out Soon 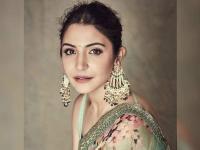