Tamil hero Suriya has taken the movie promotion to the next level by releasing song mid-air. Suriya is shooting for  Soorarai Pottru, based on the life of Captain Gopinath, the father of low-cost airlines in India.

The team of the film has organized the audio launch of the film, inside a Spicejet aircraft which was decorated thematically as per the essence of the film. Similar to the promotion done by the team of Kabali, the makers displayed the picture of Hero Suriya and film name on the aircraft.

The team also gave a chance for a hundred underprivileged children to fly for the first time.

"Captain Gopinath made the common man fly for one rupee. When every common man wanted to fly and it was his dream, to fly the common man was Gopinath's dream. We've put the story in an interesting manner, " Suriya said.

Director Sudha Kongara talking about the film said that she has researched the subject for almost ten years as she got inspired by the Simply Fly book written by Gopinath.

"It's an incredibly important story. Captain Gopinath is an icon of our industry. I'm delighted we can be a small part of retelling the story, " Ajay Singh, Chairman of SpiceJet said. 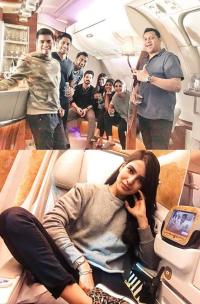