Coronavirus Leads To Death of 242 in 24 Hours

The effect caused by the deadly COVID-19 is intensifying day by day as the death toll in Chinaâ€™s Hubei Province has 242 within just 24 hours of the breakout. This made the situation even worse in the dragon country.

According to the officials, 14,840 new COVID-19 cases were reported as the province witnesses continuous rise in the toll day by day with the virus spreading very rapidly.

Hubei Province Health Commission said that the "patients can receive standardized treatment according to confirmed cases as early as possible to further improve the success rate of treatment".

Soon after the news got to spread the Chinese government has announced a shakeup in the Hubei Province. The virus resulted in people fearing to hit the roads of getting the virus infecting them.

Many employees have opted to work from home as physical touch with the infected person might land them also in deep trouble. Many parts of the country have turned empty as no one stepping out of their homes.

"Cases have definitely been underreported all along," Charles Chiu, a professor of laboratory medicine at the University of California, San Francisco said talking about the deadly virus.

"There have been reports of likely infected individuals being turned away from hospitals and sent home because the medical system in Hubei is being overwhelmed, with the focus on treating the more severely ill patients," he added.

Is YSRCP Changing Its Stance On CAA?

GHMC Fines The Minister, But Know How Much?

Why Is Chandrababu So Silent These Days?

A Remarkable Tour To Delhi

IPL 2020: Dhoni-Kohli-Rohit-ABD On One Side Vs Russel-Pant-Stokes On The Other!

Is RSS Unhappy With Modi Government Or ...?

Do You Know What Trump's 3 Hours Visit Costing Ahmedabad?

Can You Guess, The Number 2 Richest Person In India? 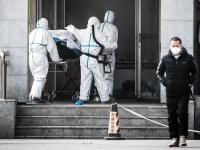 First Coronavirus case Confirmed in the US