There is a notion among people that film industry is superior and small screen industry is inferior which is completely false. It was proved in many ways. Even big stars like Amitabh, Salman, Nagarjuna, Nani and NTR entertained people on television despite being film stars. Many small screen beauties proved that they are no less than movie heroines when it comes to glamour.

Anchor Sreemukhi is definitely one of them. She hosted an array of shows like Adhurs, Adhurs 2, Bhale Chanculey, Pataas, Comedy Nights, Sare Gama Pa, Super Singers and many others. She impressed everyone with her hosting abilities and she was recently awarded the most desirable women on Television from the Times Group. Keeping up her tag, Sreemukhi often treats her fans with hot uploads and here is one such delicious click.

In this picture, Sreemukhi is seen sitting on a chair and posing naughtily in a short gown. She is looking too glamorous and the funky hair style added to the oomph factor. She is just way too hot to handle and is sure to give some heroines a run for their money. What do you say? 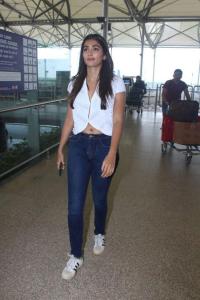