Ace Choreographer Ganesh Acharya is now facing the allegations of forcing a Woman Choreographer to watch adult content and offer commission to him in her earnings.

In the complaint lodged with Maharashtra Women's Commission and Amboli Police Station, The 33-Year-Old Choreographer accused Ganesh Acharya of forcing her to watch adult videos and pay him commission from her income.

Ganesh Acharya is the General Secretary of Indian Film & Television Choreographers Association. He choreographed songs in as many as 500 feature films till date. This isn't the first time Ganesh Acharya faced such sort of allegations. Legendary Choreographer Saroj Khan accused him of depriving New Choreographers of work using his influence. During the #MeToo Movement, Actress Tanushree Dutta alleged Ganesh Acharya remained a mere spectator when Nana Patekar was misbehaving with her during a song shoot of the 2008 flick 'Horn Ok Please'.

In the past,  Ganesh Acharya managed to defend himself inspite of harassment allegations. This time, It won't be easy for him to come out clean if the victim produces necessary proofs. 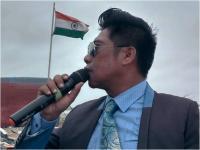