Each and every actor at their film pre-release events tend to get emotional as for many of them, it is like a dream come true to act with a certain actor or a director or just to act.

Aswatthama is a different kind of story altogether for them. The team looked really concerned about the girl-child situation and growth of rape culture in India.

As the theme of the film deals with the same, it feels apparent that people also feel so much emotion on stage with crazy turn of events at every possible turn for women in terms of security.

Actress Mehreen Prizada got more emotional than everyone else and said that she wants someone to be Aswatthama in society as well to inspire many men to become like him.

Naga Shaurya, the lead actor, writer and producer said that he wrote the story after looking at what happened to his friend's sister, and wished to see, a better world.

Movie is releasing on 31st January, 2020. Ira Creations produced the film in the direction of Ramana Teja.

Prabhas Getting Linked With Every Director In The Industry!

Why Tier-2 Leads Are Not Able To Show Consistency? 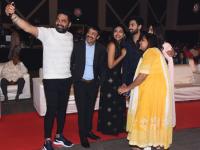