Ala Vaikuntapurramuloo is unstoppable at the box office and the new chapter it has written in Allu Arjun, Trivikram Srinivas and SS Thaman careers will be something many will talk about for years to come.

In clash with Superstar's successful film, Sarileru Neekevvaru, the movie did not just held up but became a huge blockbuster, much bigger than SLN.

While, SLN crossed 2 Million mark at US Box Office, AVPL crossed 3 Million by Monday and it is looking to become non-Baahubali Industry record in USA.

As Tuesday due to offers, the collections for films are normally high in comparison with other weekdays, movie is set on course to beat Rangasthalam at the market.  Monday being a holiday worked in favour of the film, as well.

Distributors cleverly went for more footfalls than higher rates right from premieres and their constant publicity that the film won't be available on popular platforms has also helped it to record such a feat.

For Trivikram Srinivas, his brand has grown leaps & bounds from A..Aa, despite him giving a disaster like Agnyathavasi and a complete action film like Aravinda Sametha. All three of them entered 2 Millon club and AVPL breached 3 Million.

It is the 6th Telugu film to do so after Baahubali-1 & 2, Rangasthalam, Bharat Ane Nenu and Saaho. It is the first film to achieve 2 Million, 2.5 Million, 3 Million and hopefully, 3.5 Million for Allu Arjun.

Young Heroes Trying To Bring Back The Ponytail Look!

Suriya To Portray A Politician In His Next?

Payal Shares Her Claims In The Interrogation 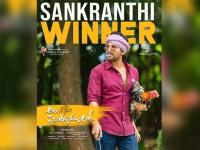