Eesha Rebba decided to concentrate on look change after Aravinda Sametha and she managed to look more glamorous than ever in various images.

She also worked hard to earn the belief of producers that she is not just an actress suitable for regular roles or stereotyped neighbourhood girl role in Telugu.

In 2019, except for Ragala 24 ghantallo, nothing released and she seemed to have failed to convince producers.

But now, she entered Bollywood and the director Raj Singh Chaudary noticed her on social media, it seems. He won a National Award too.

The director liked Eesha Rebba's photos and invited her for an audition. She went to Mumbai and impressed him, team with her audition tape, it seems.

She is cast opposite Harshvardhan Kapoor, son of Anil Kapoor in the film and she will be seen as a Rajasthani girl. 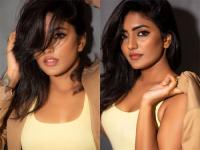