Balakrishna Sacks RP! Will It Backfire?

Nobody would dare to either question or go against the decision taken by Nandamuri Balakrishna. That's what proved costly for Cinematographer Ramprasad.

Actually, Ramprasad was the Cameraman for Balayya's disastrous flick Ruler. Boyapati Seenu decided to use his services for his hat-trick project with Balakrishna. For reasons unknown, Boyapati is now asked by Balayya to change the Cameraman.

Any such major decisions would trouble the Producer more than anyone else because of the delayed shooting and budget escalation. Already, Producer Miryala allotted a budget that's beyond the market range of Balakrishna. If these changes lead to budget escalation, The project might eventually end up as a cost failure irrespective of the word of mouth. Isn't Balayya aware of the risk involved?

Telugu Girl Becomes Most Wanted For Such Web Series

Director Opens Up About His Humble Beginnings 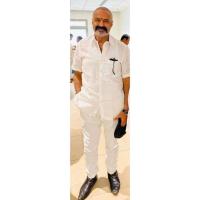