Actress Pooja Hegde is currently enjoying the success of 'Ala Vaikunthapuramlo'. After some initial setbacks, this beauty's career is going at jet speed with back-to-back hits like 'Aravinda Sametha', 'Maharshi', 'Gaddalakonda Ganesh', 'Houseful 4' and 'Ala Vaikunthapuramlo'. During the promotions, she shared some interesting things that happened in recent times.

She heaped praises on his director Trivikram and said that he is the coolest person she ever met and he encouraged her to dub for 'Aravinda Sametha'. She told that she wanted to dub for 'Gaddalakonda Ganesh' too but that didn't happen because of her busy schedule.

She told that she juggled between the shoots of 'Aravinda Sametha' and 'Houseful 4' at that time. After finishing the shoot of NTR's film, she flew to Ahmedabad and had to drive alone to Jaisalmer at midnight. She said that her family was very scared at that time and she kept them updated every minute that night to reduce their tension.

She added that she has the capacity to do four films at once. Apparently, she worked on 'Ala Vaikunthapuramlo', Prabhas's film and Akhil's flick at the same time. Pooja is one of the busiest star heroines in Tollywood now. 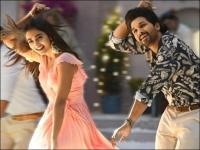