Guruji Gets Into Self-Promotion!

There are many directors in the film industry but only a few have a brand of their own. Writer-director Trivikram Srinivas is one of them and he is even called as 'Guruji' by his ardent fans. His recent outing 'Ala Vaikunthapuramlo' starring Allu Arjun and Pooja Hegde in the lead released this Sankranti season to a complete positive talk and is running with packed crowds. The entire team is elated over the film's result.

It is quite common that the team releases a special poster with the film's crew or the hero to thank the audience. But 'Ala Vaikunthapuramlo' team released a poster which has a complete picture of Trivikram thanking the audience just like a star hero or a politician. The poster has a 'Thank You All' caption and also wished people on account of Bhogi. This poster is getting trolled in social media.

Some people are criticizing that Trivikram is promoting himself just like star heroes. Publicizing heroes is necessary as they need to stay in limelight all the time. That is why they release posters of star heroes all the time. But releasing posters with directors in it is very rare. People are commenting that Trivikram got into self-promotion. Let us see if this promotion stops here or continues in the future too.
Download our app 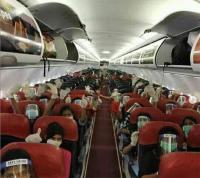