What Is Gopichand Doing Now?

It has been a long time since action hero Gopichand scored a hit. He pinned a lot of hopes on 'Chanakya' but it failed badly leaving the actor confused about his story selection. He reportedly took some time off from films and in the meanwhile, listened to a couple of scripts.

There is a lot of talk about Teja directing him but no official statement was heard. Previously, he launched a film with his 'Gautham Nanda' director Sampath Nandi but there was no news about it from then. Finally, the team gave an update saying that the shooting kick-started from Saturday and Gopichand will also be taking part in it.

Milky beauty Tamanna will be seen as a Kabaddi coach in this flick and she even took lessons for getting into the skin of the character. Mani Sharma is giving music for this big-budget film bankrolled by Srinivasa Chitturi. 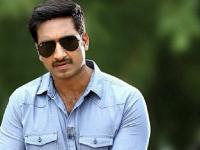 Gopichand comes up with Allu Arjun's song as the title!